She was a different kind of special. She wasn’t the usual, “Wait till I get some vodka in my body so we can party”, she was the “Let’s go to the skin clinic and get some free kaya cool drink just because we can.” She liked to make the world believe that she would change their lives, if only someone told her just how much truth there was to that. Her favorite color often shuffled between black and purple and no matter how much she loved sushi, if you knew her, you’d know that the oily chicken roll with not too much hot sauce from the roll’s point across the street was her guilty pleasure.

She was late night conversations that turned to,” Hey look, the sun’s out.” The perfect mix of, “Take a really good picture of me so I can post it but let’s also sit in the nature and talk for hours.” Most days, she felt to much, and I swear it was like the fire within her would one day explode and create fireworks of it’s own kind.

Her story lies in carefully printed works of the poems she wrote as a child and the book we wrote when we were twelve. She craved the little doses of color she brought in her life with closely calculated shades of neon hairbands and hair color. But that isn’t all she was, she was summer’s spent rereading Wuthering Heights and stolen cigarettes on rooftops.

A strange concoction of being scared to get injections and boldly telling her ex to “Fuck off” followed by an hour of tears rolling down her cheeks. She was the candle on our friendship anniversary muffin and continuous rants of “You won’t believe what happened!” followed by, “There’s no reason I won’t get into Harvard.” She couldn’t wait to learn from the world, couldn’t wait to learn to code and speak five languages and debate like nobody’s business.

But I’m afraid that by the end, she was constant trips to oncologists and needles injecting more misery inside her. She was in the carefully combed strands of her wig and losing her voice in hospital rooms. I’m afraid she never got to say her goodbyes, even though she spent the better half of her life rehearsing what she’d say. I’m afraid that the little girl who loved to sing ‘top of the world’ and couldn’t pronounce “three” had to decide at the age of fifteen, what she wanted for her last wish. The fear that  still makes my body shake with nervousness but she just smiled and said,” I will kick cancer’s stinking butt.” I can’t handle the idea of the world not knowing her. The idea that someone who was a part of me for seven years may no longer exist.

I’m afraid because she once told me, “One day, I’ll die and they’ll all miss me.” 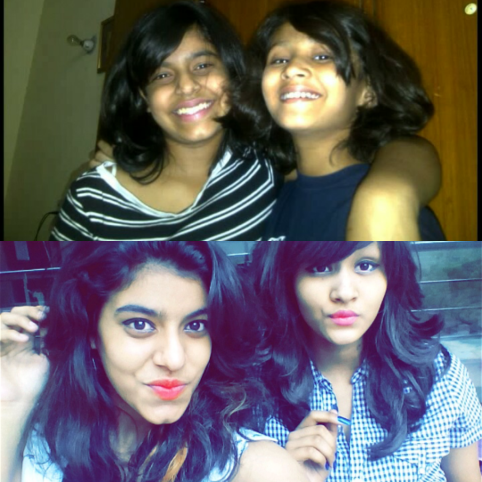 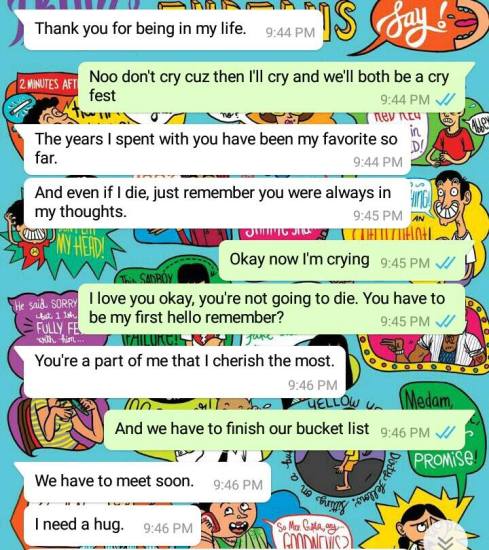